I do not read much apocalyptic fiction.  I have not even read The Left Behind Series, although I do own most of them and will probably read them someday.  The Seraph Seal is based on the four horsemen of the apocalypse and set in 2048.  Paul Binder is chosen to find the four people representing the four horsemen or four elements; meanwhile, the president of USAmerica is one of the opposing four, also working to find his other three.  Both teams must find the right people and figure out what their roles are before the world is destroyed.

There were many aspects of this book that I really enjoyed.  First of all, the appendices were especially interesting to read.  I kept asking my husband about different entries in "the Alphabet of the Apocalypse."  I enjoyed thinking about where our world is headed, especially in areas like technology.  I liked how things sort of fell into place for the "good" team, indicating God's hand in everything!  There were aspects of this future world that are completely possible-if not probable; however, not everything in the narrative was Biblical.  I did not like the mysticism that seemed mixed in, and I did not feel the Christian viewpoint was as strong as it could be.  I found it a bit strange that there was no mention of Jesus returning in a Christian end time book.  The beginning of the narrative was a little hard to follow; there were many characters to keep straight, and it slowed the reading.  The story itself was good, I love clue gathering suspense plots (think National Treasure).  Overall, I would recommend the book with a reminder that it is fiction...if you want to know more about the end of the world, study the book of Revelation and other prophetic scriptures.  This was a fun book that made me wonder about the future and made me want to reread some of these scriptures.  4 stars for story, 2.5 for Christian viewpoint

Thanks to Booksneeze for providing me with a free ebook of this novel in exchange for my honest review.
Posted by Megan @ Inspired by Fiction at 8:30 PM 1 comment:

Secrets of the Heart: Book 1 of The Ravensmoore Chronicles 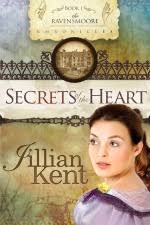 Secrets of the Heart is a fun, easy read.  Lady Madeline Whittington does not trust doctors, not after her father bled to death in the care of one, and her brother and sister died of smallpox after another refused to treat them.  A surprise encounter with one of her father's doctors triggers conflicting emotions.  Lord Devlin Ravensmoore is studying to become a doctor, but because he is an Earl he is shunned by high society due to taking an occupation that is "beneath him."  Between meeting Lady Madeline and visiting Ashcroft Asylum, his life is about to change as well.
With mystery, romance, and suspense-this is a fast-paced novel.  The plot is unique, and the historical aspect of the novel is very interesting. The theme of forgiveness is powerful and clear.  I enjoyed this book and will be sharing it with my fellow readers of historical fiction.

I received a free copy for review.  This in no way influenced the opinions shared above.
Posted by Megan @ Inspired by Fiction at 6:43 PM No comments: