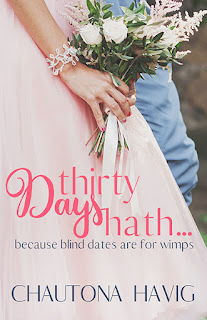 Blind Dates Are for Wimps!

At least, that’s what Adric Garrison thinks. Can you blame him? Thanks to his sister and brother-in-law, Adric is about to embark on a year of month-long, chaperoned, blind dates. Awkward.
He didn’t ask for it. But Adric still finds himself living what seems more like a bad TV reality show than a new life in Fairbury. Once an ordinary (if prematurely gray and vertically challenged) guy, Adric is now Fairbury’s newest “most eligible bachelor,” and dreams of permanent bachelorhood loom on the horizon. Will he call it quits before the year is out, or will one of his “girls of the month” change his mind? One man, twelve women, one happily ever after.

This was a cute story with a unique premise. I enjoyed the writing and there were a number of clever and fun scenes. Unfortunately, because there were so many different women, I missed some relationship development. I also didn't really think that the story needed the suspense aspect, although it did add some drama and solidify Adric's feelings for his choice. Overall, I did enjoy the book and look forward to my next book by Chautona Havig. 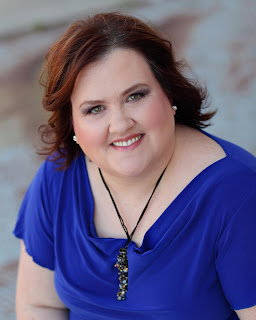 Chautona Havig lives in an oxymoron, escapes into imaginary worlds that look startlingly similar to ours and writes the stories that emerge. An irrepressible optimist, Chautona sees everything through a kaleidoscope of It’s a Wonderful Life sprinkled with fairy tales. Find her on the web and say howdy—if you can remember how to spell her name.

A Silent Truth No One Admits: Blind Dates Are for Wimps

Maybe I’m not the one to talk. After all, I never dated. Not really. My best friend in high school was a guy. We went to the movies. We did things. Still, we were just great friends. I had what might be considered one date in Lubbock, Texas in 1987. Maybe. I didn’t consider it one, but I suppose the guy might have. Maybe. Then I went from best friends with the guy I’ve been married to for 30 years to engaged in the span of a few seconds after what might have been a rhetorical question. He’s under orders not to tell me if it was. After all, he’s the fool who went on to say, “I do.” Just sayin’. Still, in the first decade of the 21st century, I discovered a new “thing” in reality TV. The Bachelor. Though I tried watching it, I couldn’t after a while. It started out reasonably clean, but then it devolved into cat fights, spit-swapping sessions, and drama. Oh, the drama. But one aspect intrigued me. The focused attention to finding the girl. What if Christians did that? What if we stopped playing the silly game of “pretend we’re not in this to see if you’re someone I could put up with for the next fifty or sixty years…”? Oh, man. What if the church rallied around its members and helped without pushing. Trust me, you don’t want to push too much. You may discover that the people you’re pushing just get together and talk about it. Laugh at your antics. Mock the ridiculousness of it. Not that Kevin and I ever did that back in the day or anything. (Check out that story HERE.) That “what if?” spurred an idea. Sister churches. Chaperones. Not a couple of weeks in a giant house somewhere, but a whole month of real living with someone, day in. Day out. And again, with that chaperone to avoid that “appearance of evil” thing. If you could spend that much time with someone, seeing warts, virtues, best and worst sides… well, maybe you might just be right for each other. At the least, you’d have a good idea if you even wanted to find out. That’s a healthier and quicker start than two or three months of a date here or there and hoping you’re seeing the real person. Right? I created a character and ran with it. From giving him less than Hollywood good looks, to an anger problem and a blue-collar job, Adric had lots going for him… and not so much! Then I tested it out. Acid test. I signed him up for eHarmony. No, really. I did. For the record, apparently short, prematurely graying mechanics with anger issues are a hot commodity. It took hours to get it set up, but man there were many women out there for him… supposedly. And to this day, my Gmail email (that I never use) still says adricgarrison@gmail.com. No joke. For what it’s worth, Adric learned one very difficult lesson that year. As I’ve already confessed. I’ve never been on a blind date. I doubt anyone would even consider that I’ve been on a date. Still, after writing this book, I know for one thing. Blind Dates Are for Wimps. 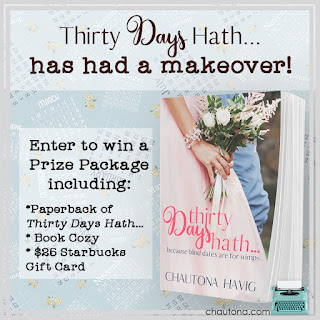 To celebrate her tour, Chautona is giving away a grand prize of a paperback copy of Thirty Days Hath, book cozy, and a $25 Starbucks gift card!!
Be sure to comment on the blog stops for nine extra entries into to the giveaway! Click the link below to enter. https://promosimple.com/ps/dee7/thirty-days-hath-celebration-tour-giveaway

It is an odd idea, but it was a boatload of fun to write. Thanks for taking the time to read and review!

I love this one!

Wow Yay! This is awesome!