An Eye for An Eye: Book Review

An Eye for An Eye is the second book in Irene Hannon's Heroes of Quantico Series; although Hannon admits that this was the first one she wrote. Against All Odds was the first book in the series and I thoroughly enjoyed it, but didn't remember how much until reading this one. Irene Hannon creates real characters and always has at least one strong Christian in her books. In An Eye for An Eye, Emily Lawson is that person. After 20 years she runs into her first love, Mark Sanders, minutes before a sniper takes a shot at them. Mark is a member of the FBI Hostage Rescue Team and is away from Quantico recovering from an accidental shooting that resulted in some bad press, so he is the obvious target; however Emily gets shot. As Emily recovers and Mark delves into the case surrounding the shooting, the two get reacquainted. The case is not a simple as Mark hoped and questions arise about who the target really was, and what the motive was. 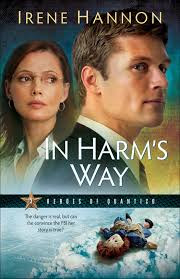 This book has romance, suspense, personal growth, and a strong Christian message: all the things that I look for in a great book! The book was written well, with a strong storyline and well-developed characters. I rooted for the hero and heroine and had empathy for the "villian." The plot moved quickly and smoothly, and most importantly there was a strong message and theme throughout the book. I would highly recommend this series.
Look for my review of In Harm's Way, book 3 in the series, later this week as part of the Revell Blog tour.
Posted by Megan @ Inspired by Fiction at 3:24 PM

I can't wait for this book. Great review!

This sounds like an excellent book to keep your interest. I have not read Hannon's books yet, but will give this a try. Right now I am finishing a new one by Francine Rivers entitled "Her Mother's Hope." The story is about four generations of women beginning at the turn of the century and leading into the WWII era. Francine is such an amazing writer who infuses such richness into her stories. You should check it out!

Well...Francine Rivers is my favorite and I have that book waiting for me! I will be reading it soon! Thanks