In my Mailbox Monday: May 3

In my Mailbox Monday originates from two blogs:The Printed Page and The Story Siren. I am using it to highlight any books that come into my house the previous week, whether they are from the library, from a store, from a friend or actually in the mailbox. 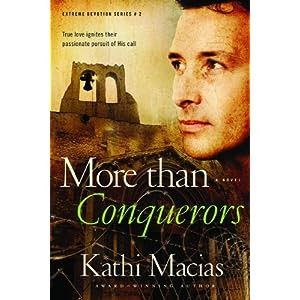 I only received one book this week, but it's a good one! Straight from author, Kathi Macias, I received More than Conquerers.
Description from AMAZON:
True love ignites their passionate pursuit of His call
With violent crime on the rise and the political climate changing throughout certain parts of Mexico, the opportunity for open Christian witness, particularly in some areas of Chiapas State, is rapidly decreasing. Hector Rodriguez pastors a small church in the tourist-popular border town of Tijuana. He also routinely carries Bibles deeper into the hostile areas of Mexico, where he ministers despite increasing difficulty and persecution.
Hector’s mother accompanied him on one of those trips and felt God called her to stay in the little village of San Juan Chamula, where she uses the Scriptures to teach reading to the families who are open to it. In retaliation for Hector’s bringing the Bibles into areas hostile to Christians and in an effort to dissuade him from continuing to expand his ministry there, Hector’s mother is murdered. Hector must decide if he will continue his work despite his worries about protecting his wife and children.
This is the second book in Kathi's Extreme Devotion Series. I expect to receive the first one from Amazon soon.
Posted by Megan @ Inspired by Fiction at 7:01 PM