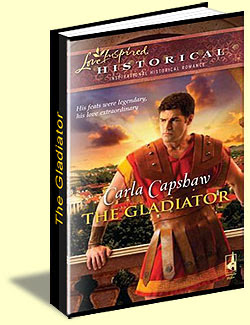 I was excited to read this book. It engaged me quickly, and I love this time period and theme. The faith in the persecuted church, their strength and witness is inspiring. The church grew like wild fire because of that faith in the face of horrible trials and death. We live in an age where we have relative freedom of sharing Christ with others, and yet we hold back because of various small consequences. The believers of that day and age literally faced swords, slavery, lions, and beasts before they would deny their Lord! WOW, we should be convicted by that.
Pelonia has lost everything but her life and her God; if it were known that she was one of "the deviants," they would take her life as well. As it stands, she is a slave to the infamous Caros Viriathos, head of the gladiator training school and x-gladiator himself. When he first sees her, he is drawn to her instantly. He buys her from the slave trader, hoping to win her heart. She also feels for him, but vows she will not be a slave forever. He wants only to keep her near, while she wants her freedom.
It was a good story, an engaging and quick read. I had trouble reconciling some of the dialogue and actions to the characters and situations. Some of the things they said and did, or even thought did not seem believable; because of this, at times the romance felt forced. A slave and her master falling in love is tenuous ground and can be very exciting and emotional; however, I would have liked to see more justification to their growing feelings. That being said, the plot moved quickly. I loved the strong testimony of the Christian characters. There is a second one planned, and I would like to find out how the story progresses with the secondary characters. This is Capshaw's first novel, and I would imagine her next one will be even better.
Posted by Megan @ Inspired by Fiction at 7:39 PM

Oh this book has been on my reading list for about a month now! It looks like a good one.