Love finds you in Liberty, Indiana by Melanie Dobson 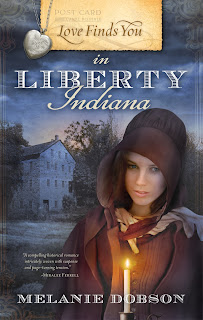 In the author's notes, Dobson speaks about a cousin's home that was rumored to be part of the underground railroad. This memory was part of her inspiration for her story. The house I grew up in was also said to be part of this system used to sneak runaway slaves to freedom. I remember there being a small crawl space under the stairs that led to another entire room. It had a mud floor and cement walls, with a ridge or bench built out of the walls. My parents told me they had found a huge crock in the mud big enough for a person to fit. They eventually tore down that separating wall, but I often have wondered about the people who hid in that room, or even in that big pot, and the family who lived in the house and provided that space.
Love finds you in Liberty, Indiana is a historical romance about Anna Brent, who, along with her dad, operates a station on the underground railroad. In public she occasionally has to speak pro-slavery in order to hide her identity. Daniel Stanton, on the other hand, speaks out against slavery. The two clearly do not get along until they are forced to work together.
I liked this story. The romance was a bit formulaic and the story predictable; however I enjoyed the history and the speculation involved.The secondary characters were wonderful: Daniel's sister Esther and her husband Joseph, housekeepers Charlotte and Greta, and the heartwrenching tales of the runaways.
Summerside Press is planning to publish at least one novel per state in this series. There will be historical and contemporary romances all located in real American towns. I think this is a great idea, allowing readers to learn more about American history and life around the States.
Posted by Megan @ Inspired by Fiction at 10:54 AM

How interesting about your house! Wow. The book sounds good too.

I became a follower. Love to win the book Takes 2. Thanks