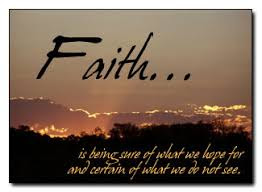 Hebrews chapter 11 is often called the "Hall of Faith."  It is where we find the Biblical definition of faith and hear about many of the great men and women of faith.
Hebrews 11:1 states that "faith is being sure of what we hope for and certain of what we do not see.
Hebrews 11:6 says that "without faith it is impossible to please God, because anyone who comes to Him must believe that He exists and that He rewards those who earnestly seek Him."

Through this chapter, we remember that by faith, Noah built an ark though he had never seen rain.  By faith, Abraham left his home following God's direction, though he didn't know where he was going.  By faith, Moses' parents hid him for three months .  Then by faith, Moses obeyed God, and countless miracles followed.  By faith the walls of Jericho fell, and by faith Rahab his the spies and saved her family.  The chapter ends by saying that there is not time enough to tell of all the events and miracles that occurred by faith; people conquered kingdoms, shut the mouth of lions, quenched fire, escaped swords.  People were raised from the dead, while others were tortured or killed.  Many lived in poverty and persecution.  Verse 39 and 40 states "These were all commended for their faith, yet none of them received what had been promised, since God had planned something better for us so that only together with us would they be made perfect."

Wow, considering this is just a small portion of the acts of faith in the Bible just think about what faith can do. In John 14:12-13, Jesus says "Very truly I tell you, whoever believes in me will do the works I have been doing, and they will do even greater things than these because I am going to the Father.  So I will do whatever you ask in my name, so that the Father may be glorified through the Son."  Also, in Matthew 17:20, Jesus says "Truly I tell you, if you have faith as small as a mustard seed, you can say to this mountain, 'Move from here to there,' and it will move.  Nothing will be impossible for you."

A few years ago I did Beth Moore's Bible study, Believing God.  In it she challenged us to add a verse to Hebrews, chapter 11, making 'verse 41' say "By faith, your name. . ."  I still remember the thrill I felt at that thought.  The Bible is clear that as a follower of Christ, He has chosen us to be involved in His work.  WOW, God has a plan to use me just as he used those individuals in the "hall of faith."  Right now, my Bible has an extra verse in Hebrews 11, saying "By faith, Megan...," and I am living in the dot, dot, dot right now.

Jesus, give me the faith to be used by You.  Give me the faith to say "Yes, Lord" and "Here I am, Send me,"  No matter what you ask.  I want to follow You, even when I don't know where I'm going.  I want You to work in me and through me.  Although, sometimes I will fail, You will never fail--so work in me Lord, use me!  Thank you for the privilege of being a daughter of the King and allowing me to take part in Your Kingdom plan.  I want to bring glory to You!