The Opposite of Art 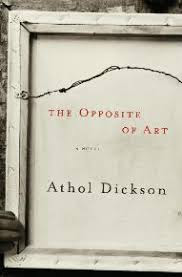 First of all, what a great cover.  If you cannot tell, it is the back of a canvas piece of artwork.  I didn't pay much attention to it when I first got the book, but when I finally looked at it, I thought it was really clever!
In the book, Sheridan Ridler is a brilliant artist whose life is cut short too early, or at least that is what the world thinks.  When Ridler is thrown into the Hudson River, everyone thinks that there is no way he could survive; but he does survive. He just disappears.  Over twenty years pass while most of the world thinks he is dead, and he travels the earth searching.  He searches for what he calls "the Glory," the image or experience he had when he falls off the bridge into the river.  He is desperate to paint or recreate "the Glory," and while all of his attempts fall short of his memory--they never fail to move those who see them.

This is an interesting book.  The prose is beautiful with clear and unique imagery.  The story is intriguing, and the characters are well-developed.  As a Christian who know the Truth, the story made me really think about certain things.  For example, I believe the word "glory" can only be used to describe the Lord and His creation (which brings Him glory).  I saw in Ridler the searching heart that all of us have.  Some of us try to fill it with other things; some search their entire lives, trying other religions, occupations, just as Ridler did.  Besides searching, there were other themes, of love, hope, and dying to self.  I feel like the book could be confusing to "seekers" in that it never really directly points to Jesus.  (I love the one and only scene that Jesus is mentioned though!)  I think some of the surrealism could be confusing for someone who does not know the Bible (like Esperanza).  Overall though, I would recommend this book to other Christians, but probably not new believers.

I received this book from Glass Roads Public Relations in exchange for my honest review.
Posted by Megan @ Inspired by Fiction at 5:15 AM